Cheesecake is such a favorite, but most of us don’t make it
very often. I don’t know why, honestly. Maybe it’s the calorie count. Maybe it
seems more daunting than other cakes.

All things considered, though, it really is easier to make
than traditional flour-based cakes, but it’s true that testing its doneness is
a challenge, and it’s very easy to over-bake. It reminds me of brownies that
way, since the center seems underdone when both come out of the oven. But, let’s
not forget that, unlike brownies, even an over-baked cheesecake is still moist
and delicious. 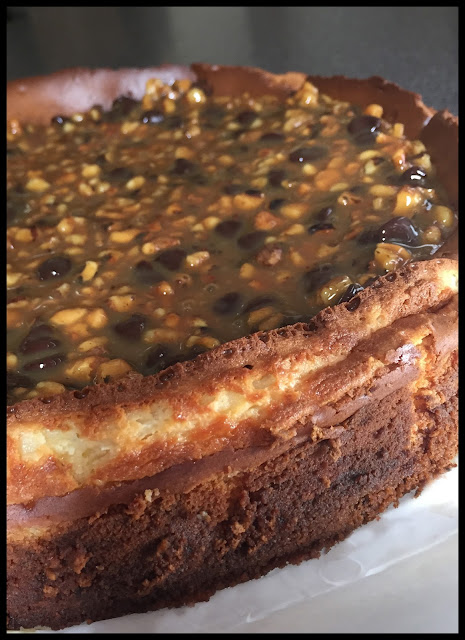 I spend lots of time trying different cheesecake recipes,
and I find that I actually prefer those that aren’t very thick. I like a 60-40
ratio of cheesecake to crust/topping, personally. My tastes considered, here’s
a tweaked recipe for cheesecake, presented only three ways, but the topping
possibilities are endless, based on your favorites. You can simply use a jam or
preserve topping, you could cook down fruits, or you could make something more
decadent. I tried all three options and the results were amazing.
After you bake a couple, you’ll have the doneness issue
resolved. It’s really a matter of knowing your oven and of knowing what to look
for in a ready-to-remove-from-the-oven cheesecake.

My two samples pictured today are the raspberry preserve and
the turtle-topped cheesecakes. 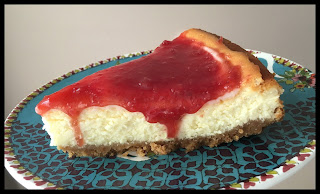 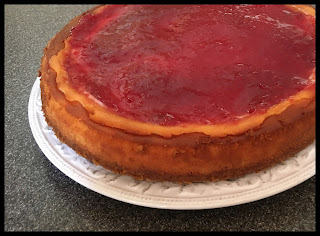 3 – 8oz. blocks cream cheese, at room temperature
4 eggs, at room temperature
½ cup Breakstone sour cream (this brand holds up best in the
cake)
Raspberry (or your favorite) preserves, mixed with 1 cup
fresh raspberries
(Boil together for about 5 minutes then allow to cool.)
1 medium jar caramel ice cream topping
(Combine and store in fridge until ready to top cheesecake.)
For the crust: Combine
crust ingredients and press into bottom of 9-inch springform pan.
Beat cream cheese and sugar until smooth. Add eggs, one at a
time and fully blend. Add sour cream and vanilla. Once blended, pour over
crust.
Bake for 70 minutes and once the time is up, open the oven
door and allow the cheesecake to rest in the oven for about 20 minutes.
Remove from oven and allow to cool on rack. Once cool,
remove sides of springform. (I cover the bottom of my springform with parchment
paper to make removal easier, but this is optional, as you can leave it to
serve on the springform bottom as well.)
Cover with toppings of your choice and refrigerate at least
5 hours before serving.
Delicious
0